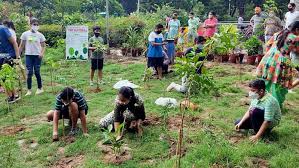 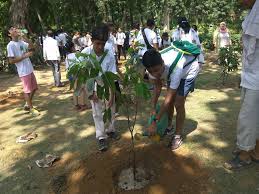 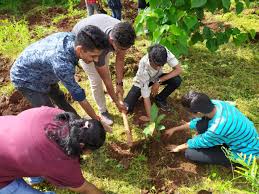 In 1946, the unfair trade practises of the middle men brought the farmers of Kaira to unite and fight against this system which brought Amul into existence. Their relentless effort in improving their socio-economic conditions ultimately brought their working as a model for dairy development programme in our country – popularly known as Anand Pattern. Replication of Anand Pattern through Operation Flood programme helped India to achieve first position in production of milk in the world.

Alarmed by the climate change and global warming and their understanding of that dairy farming like agriculture is dependent on nature, they took an oath on 15th August, 2007, after the flag hoisting ceremony, to plant a sapling and ensure that it grew into a tree. Then individually they planted sapling on their own at their identified locations like their farm, near their home, on farm bunds, etc. This marked the beginning of a silent new revolution to bring a green carpet on Gujarat and India.

Farmers have also created nurseries to produce saplings and almost 45 such nurseries have been created as of date. For better coordination and sustainable success, Teams have been formed at various levels.

According to statistics of Forest Survey of India considering on an average 30-40 cm diameter of these trees, 106 trees would provide one hectare of green tree cover. Considering 47% survivability of planted trees (based on post plantation survey data, around 148.12 lakhs out of 311.98 lakhs tree planted survived during the last five years), when they fully grow up, would provide additional 1,39,735 ha. of green cover which is additional 6.41% forest cover of Gujarat State of India.

It has been estimated that when one tree is cut, in monetary terms there is loss or Rs. 33 lakhs (Oxygen worth of Rs. 5.3 lakhs, Land Fertility of Rs. 6.4 lakhs, Rs. 10.5 lakh for reduction of pollution of atmosphere and Rs. 5.3 lakh towards Flowers / Fruits and habitation to birds - animals). But the benefits that accrue to mankind when a tree is planted cannot be measured in money and is priceless.

When dairy farmers of Gujarat have planted more than 312 lakh trees in just five years and are planning to plant more trees every year, they are doing an invaluable service to the society as the brand “Amul” means price less… priceless service to mankind.

In an era of global warming, Amul is contributing its share in making Gujarat lush green. In this way, the milk producers of Gujarat are ushering in a silent revolution of greening Gujarat.

A SAPLING, OFTEN, RESULTS IN A TREE. A CRORE SAPLINGS, HOWEVER, RESULT IN GLOBAL RECOGNITION. "Amul Green" movement wins the International Dairy Federation's award for the best environment initiative in the "sustainability category" during the 4th Global Dairy Conference held at Salzburg Congress Centre, Austria on 28th April, 2010.