Milk, The inspiration behind a revolution 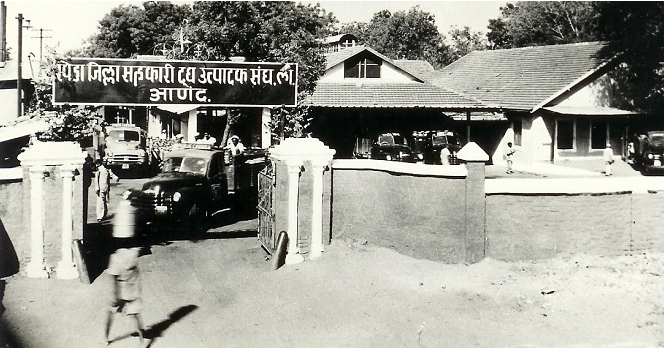 Over seven decades ago the life of a farmer in Kaira was very much like that of farmers anywhere else in India. His income was derived almost entirely from seasonal crops. Many poor farmers faced starvation during off-seasons. Their income from milch buffaloes was undependable. The milk marketing system was controlled by contractors and middlemen. As milk is perishable, farmers were compelled to sell their milk for whatever they were offered. Often they had to sell cream and ghee at a throwaway price.

They were in general illiterate. But they could see that the system under which contractors could buy their produce at a low price and arrange to sell it at huge profits was just not fair. This became more noticeable when the Government of Bombay started the Bombay Milk Scheme in 1945. Milk had to be transported 427 kilometers, from Anand to Bombay. This could be done only if milk was pasteurized in Anand.

After preliminary trials, the Government of Bombay entered into an agreement with Polsons Limited to supply milk from Anand to Bombay on a regular basis. The arrangement was highly satisfactory to all concerned – except the farmers. The Government found it profitable; Polsons kept a good margin. Milk contractors took the biggest cut. No one had taken the trouble to fix the price of milk to be paid to the producers. Thus under the Bombay Milk Scheme the farmers of Kaira District were no better off ever before. They were still at the mercy of milk contractors. They had to sell their milk at a price the contractors fixed. The discontent of the farmers grew. They went in deputation to Sardar Patel, who had advocated farmers’ co-operatives as early as 1942.

Sardar Patel pointed out that in undertaking such a strike there should be some losses to the farmers as they would not be able to sell their milk for some time. If they were prepared to put up with the loss, he was prepared to lead them. The farmers’ deputation readily accepted his proposal.

Sardar then sent his trusted deputy, Mr. Morarjibhai Desai, to Kaira District to organize milk co-operative – and a milk strike if necessary. Mr. Desai held a meeting in Samarkha village on January 4, 1946. It was resolved that milk producers’ co-operative societies should be organized in each village of Kaira District to collect milk from their member-farmers. All the milk societies would federate into a Union which would own milk processing facilities. The Government should undertake to buy milk from the Union. If this wasn’t done, the farmers would refuse to sell milk to any milk contractor in Kaira District.

The Government turned down the demand. The farmers called a ‘milk strike’. It lasted 15 days. Not a drop of milk was sold to the milk merchants. No milk reached Bombay from Anand, and the Bombay Milk Scheme almost collapsed. After 15 days the milk commissioner of Bombay, an Englishman, and his deputy visited Anand, assessed the situation and accepted the farmers’ demand.

This marked the beginning of the Kaira District Co-operative Milk Producers’ Union Limited, Anand. It was formally registered on December 14, 1946. Its objective was to provide proper marketing facilities for the milk producers of the district. The Union began pasteurizing milk in June 1948, for the Bombay Milk Scheme – just a handful of farmers in two village co-operative societies producing about 250 liters a day.

An assured market proved a great incentive to the milk producers in the district. By the end of 1948, 432 farmers had joined village societies, and the quantity of milk handled by the Union had increased to 5000 liters a day. In the early stages, rapid growth brought in its wake serious problems. Their solution provided the stimulus for further growth. For example, as the co-operative movement spread in the district, it was found that the Bombay Milk Scheme could not absorb the extra milk collected by the Union in winter, when buffaloes yielded an average of 2.5 times their summer yield. Thus by 1953, the farmer-members had no regular market for the extra milk produced in winter. They were again forced to sell a large surplus at low rate to middlemen.

The only remedy was to set up a plant to process the extra milk into products like butter and milk powder. The logic of this step was readily accepted by the Government of Bombay and the Government of India, except for a few doubting Thomases. The government of India helped the Union to get financial help from UNICEF and assistance from the Government of New Zealand under the Colombo Plan. Technical aid was provided by F.A.O. A Rs.50 – lakh factory to process milk powder and butter was blueprinted. Its foundation stone was laid by the then President of India the late Dr. Rajendra Prasad on November 15, 1954. The project was completed by October 31, 1955, on which day the late Pandit Jawaharlal Nehru, the then Prime Minister of India, declared it open. The new dairy provided a further fillip to the co-operative movement among milk producers. The union was thus enabled to organize more village co-operative societies and to handle more and more milk each year. This event also brought a breakthrough in dairy technology as the products were made processing buffalo milk for the first time in the world. Kaira Union introduced the brand “Amul” for marketing its product range. The word “Amul” is derived from Sanskrit word ‘Amulya’ which means ‘priceless’ or precious’. In the subsequent years Amul made cheese and baby food on a large commercial scale again processing buffalo milk creating a history in the world.

1964 was the turning point in the history of dairy development programme in India. Late Shri Lal Bahadur Shastri, the then Prime Minister of India who visited Anand on 31s October for inauguration of Amul’s Cattle Feed Plant, having spent a night with farmers of Kaira and experiencing the success wished and expressed to Mr Kurien, then the General Manager of Amul that replicating Amul model through out our country will bring a great change in the socio-economic conditions of the people. In order to bring this dream into reality, 1965 The National Dairy Development Board (NDDB) was established at Anand and by 1969-70 NDDB came out with the dairy development programme for India popularly known as “Operation Flood” or “White Revolution”. The Operation Flood programme, even today, stands to be the largest dairy development programme ever drawn in the world. This saw Amul as model and this model is often referred in the history of White Revolution as “Anand Pattern”. Replication of “Anand Pattern” has helped India to emerge as the largest milk producing nation in the world.

Amul meant different things to different people :
To a Milk Producer … A life enriching experience
To a Consumer … Assurance of having wholesome milk
To a Mother … A reliable source of nourishment for her child
To the Country … Rural Development and Self Reliance